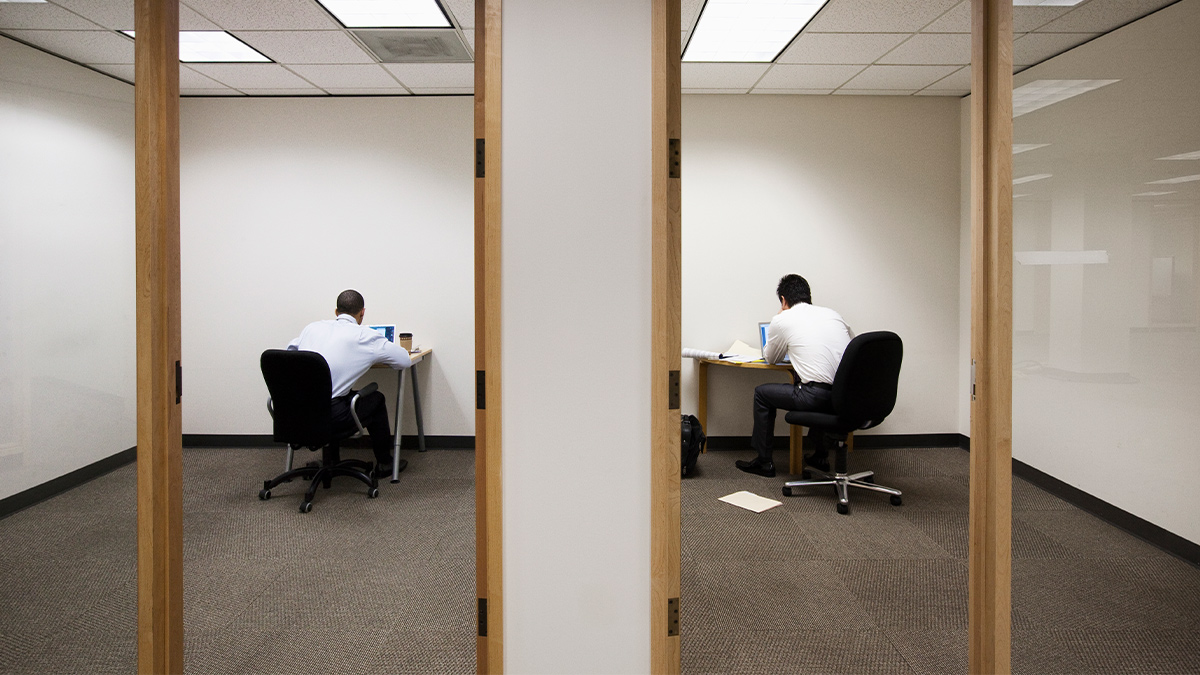 Rising rates of loneliness among employees during the pandemic have put the well-being of employees top of mind for most companies as they map out the future of work. They know that loneliness brings health problems, reduced productivity, turnover, and burnout. Some, including JPMorgan and Google, have already declared a return to the office. While increasing face-to-face interaction may be beneficial for some aspects of work, it will not, by itself, create strong interpersonal bonds among colleagues. If it did, my research with INSEAD professor Mark Mortensen wouldn’t have shown high rates of loneliness in employees prior to the shift to social distancing and remote work.

Whatever form the return to the workplace takes, building high-quality connections will require a focused set of structures and practices built on a bedrock of psychological safety. Here are the five important elements to consider.

Look out for the invisible enemy.

Employees don’t advertise their loneliness. Objective markers like team membership, network structures, or someone’s degree of extroversion don’t reveal it either. Loneliness at work is an entirely subjective internal belief: Few people truly know me or would support me in my time of need. The lonely feel only superficially connected to others, perhaps cordial but not truly collegial.

Employees themselves may not even recognize that they’re lonely. For example, an executive recently came to me with what he thought was a motivation problem. “When I took my new job last summer, I was excited about the pharmaceutical industry,” he told me. “But six months later, I’m really unmotivated. I guess I really don’t like this industry or job as much as I thought, so I’m going to start looking for something else.”

When we unpacked his dilemma, it became apparent that his waning motivation and interest had nothing to do with the substance of his work, but everything to do with the social context in which he performed it. Working on a small team embedded in a large department, he had plenty of official ties in the organization, including daily meetings with his teammates. Yet he didn’t feel genuinely connected to any of them. Upon reflection, he realized he lacked social fulfillment at work.

That executive’s experience highlights just how essential high-quality connections are for combatting workplace loneliness. Jane Dutton and her colleagues at the University of Michigan’s Center for Positive Organizations characterize high-quality connections as those based on empathy and interdependence. Ideally, as companies design their return-to-work policies and structures, they will focus on these two factors. But first they need to ensure psychological safety exists in their organization.

Psychological safety is the perception that a given environment is conducive to interpersonal risk-taking. Research in this area, led by the Harvard Business School professor Amy Edmondson, has historically focused on learning-oriented behaviors like asking questions, raising concerns, admitting mistakes, and offering ideas. Employees are unlikely to speak up in these ways unless they receive strong signals from leaders and teammates that they’ll receive positive reinforcement for doing so. They’re also unlikely to reach out to colleagues to connect interpersonally without a similar safety net.

Going beyond superficial workplace relationships can be risky, because true intimacy involves some level of vulnerability — for example, the disclosure of something private or emotional to someone else. My research and advisory work has shown that employees of all levels and backgrounds frequently cloak their inner worlds — not just their negative feelings and experiences but also their positive ones. As a healthcare executive said in one study, “I feel like our system is a little bit impaired in that way. It’s not a real safe place…it’s just like, identify your supports and stick with those and otherwise keep it under wraps.” An aerospace executive recently made a similar observation: “Using time for anything other than work is culturally regarded as taboo, and employees govern one another accordingly.” These perceptions about cultural norms and prohibitions exemplify how essential psychological safety is to facilitating those first vulnerable moves toward bonding with someone else in the workplace.

Some companies are finding ways to script social interactions to create that level of psychological safety and facilitation. For example, the Arnold and Havas Media company is holding empathy workshops designed by their entrepreneur-in-residence, Michael Tennant. Team members draw from a card deck with self-reflective questions such as “What makes me unique?” Before answering, the team member must articulate their internal reaction (“my heart is beating faster,” “my mind just went blank”) and label that emotional response (“embarrassment, anxiety”). Making these personal disclosures builds empathy in the other participants before they hear the answer to the question.

The workshops also script the second part of the interaction: a supportive response. After the speaker concludes, the listeners must also share their emotional reactions and answers to the card questions. As one participant said to a speaker during the exercise, “I saw you getting anxious, and then I got anxious, because I was putting myself in your shoes imagining how I would answer that question.” While it’s too soon to tell if these workshops will lead to a deepening of personal relationships at the company, the senior leader Julianna Akuamoah attests that they’re already seeing appreciable shifts in the way employees view and treat one another.

Other companies are orchestrating social support and empathy in alternative ways. For example, Hilary Hendricks and fellow researchers at the University of Michigan and Notre Dame are studying the use of gratitude circles at a restaurant chain. Before the lunch shift, employees gather in a circle. One member is randomly chosen to stand in the circle to have peers describe aspects of them that they like and admire. Early results indicate that gratitude givers and receivers can emerge from this practice feeling more connected.

Reports from both companies indicate there is some resistance and awkwardness involved in executing scripted empathetic encounters; there’s no doubt they’re not business as usual. In addition, these practices need to be managed sensitively to avoid triggering a sense of manipulation or exploitation. However, what these companies have realized is that sometimes people have to be forced to interact in more open, emotional, and personal ways to forge true relationships at work. If we wait until these conversations feel comfortable and normal, they may never happen.

Although workshops and exercises can help kickstart high-quality connections, they will not solve loneliness in the long term. Recall the fate of team-building interventions like the infamous “trust fall”: When the team left the woods and returned to the office, the newfound levels of team bonding slipped away unless leadership made additional changes to structures and reward systems.

As we return to the office full-time or adopt hybrid WFH models, much of the advice about preparing teams for the long haul still applies: Reestablish the team’s mission, set explicit interaction norms, consistently enforce them, create a shared team identity, make roles and processes transparent, stabilize the membership, and reduce cross-team switching costs. These steps will promote a strong foundation for team effectiveness. However, for deeper intra-team relationships, additional structural changes may be necessary. As a financial firm leader remarked, “I have realized that just adding more social time to our team’s calendar this fall won’t create the depth of relationships we want. We really have to rethink how we approach the team’s day-to-day work.”

Key aspects of teamwork to consider when designing for relationship-building are collaboration and social support. Working in parallel or merely passing the baton from one teammate to the next is unlikely to create as many opportunities for true connection as more integrated forms of collaboration. Instead, design the work for high levels of interactivity and the regular exchange of resources and thought partnership.

For example, I recently encouraged the manager of a healthcare organization to take a pulse-check of her team to see how they really felt about one another and their work as she debated how to return to the office. To her surprise, she found that while team members were satisfied with their individual work products, they felt disconnected and disengaged as a team, leading to low morale. Her team consists of brilliant scientists, whom she had incorrectly assumed were fine on their own. Galvanized by the prospect of losing one of these valued employees, this manager quickly devised structural changes in how the team operated. These included creating more opportunities to share and develop work with one another. She hopes that by adding more points of contact among teammates, stronger relationships will emerge. As a different executive recently put it, “A team is only as good as how it is set up and the support that it receives amongst its individuals.”

One more element remains to be reengineered: the performance-management system. Companies need to increase the benefits as well as reduce the risks associated with reaching out to others at work. This means noticing and rewarding people for making the first move as well as for responding supportively to others’ outreach. For example, Microsoft found that companies that provide bonuses and promotions for internal relationship-building activities also had employees with higher levels of job satisfaction and happiness. These types of extrinsic rewards are crucial to reinforce the importance and legitimacy of such efforts in the eyes of employees.

Long before the pandemic forced physical separation of employees, workplace loneliness was growing. Without a new approach to facilitating relationships at work, employee isolation and disconnection will continue to grow — regardless of whether people are back in the office. The post-pandemic transition provides the perfect opportunity to put the structures and rewards in place to facilitate a more connected workforce.